AM modulation, schematics, lots of transistors and perfect modulation

I was testing various AM radios and noticed that I don’t have a proper AM source. The AM broadcasting station in my region is very scarce and weak. Also, I wanted more options for radio receiver testing.
I thought that the internet is full of simple AM modulator circuits, but…

Typical internet schematics are not real AM. It only “some sort” of AM modulation, and, yes, radio receivers can decode sound from these circuits. Most circuits do “1″ and “2″ versions, but none was like real AM.

I was testing various schematics, with op amps, transistors, but nothing good. Then I discovered a datasheet of MC1496, and there was an inner circuit picture.

I emulated the circuit using the Orcad software demo version. I would not recommend using this software- it is not cheap, and the demo version is very limited. And it is limited more than in description. Normal demo software is limited to some size of the design. Just enough to test something, but useless in the real world. But demo Orcad is crippled more- it is limited to some node count. And every new connection adds a node, but if you remove part of the circuit node number is staying the same. Nodes even increase count if you change something in parameters. After some experiments you can leave two elements in your circuit- power supply and resistor load, but fucking software will complain about “too many nods”.
I had to “build” schematics from scratch several times to test my options.

Then I build circuits in the real world using a scratched PCB method. I only need one board and it is only an experiment. 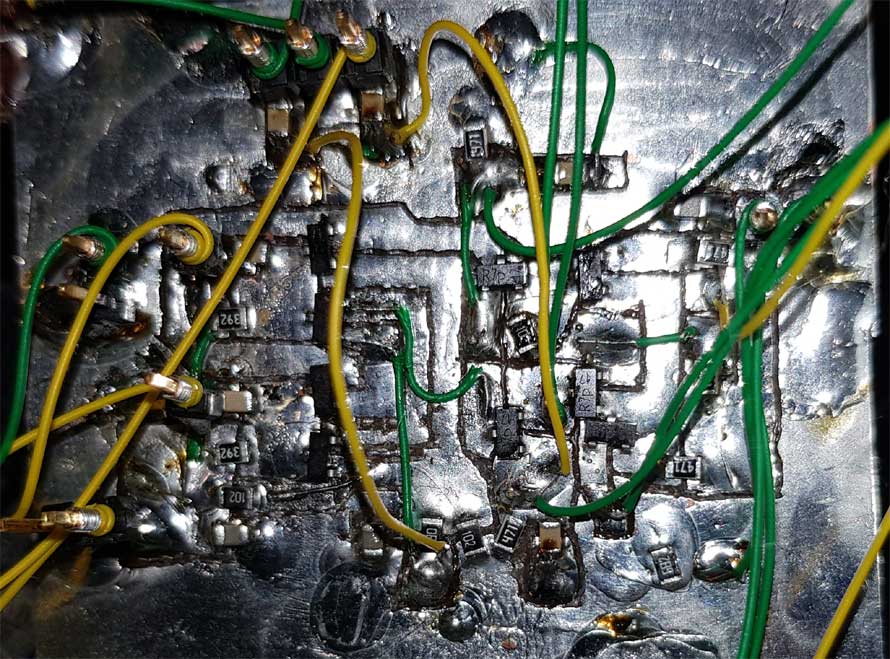 I am using high frequency transistors (up to 5GHz) but circuit designed for AM band only.

Here is the result;

Classic spectrum of AM modulation. Carrier in the center and two sidebands.

It is possible to change some pots in my modulator and I can disable the AM carrier.

This is a waveform of suppressed carrier AM signals.

I am owner of this site.
View all posts by Administrator →
This entry was posted in Anything and tagged Analog, DIY. Bookmark the permalink.